Last week, The Times published an article by their regular columnist Caitlin Moran in which she scorned the Conservative Party’s response to the energy crisis and promoted the hashtag #LooksLikeInsulateBritainWereRight.

Insulate Britain were demonised by the right-wing press after they began peacefully blockading motorways in order to disrupt the flow of business and demonstrate a powerful level of dissent against a government which was either asleep at the wheel or under the control of rich elites. 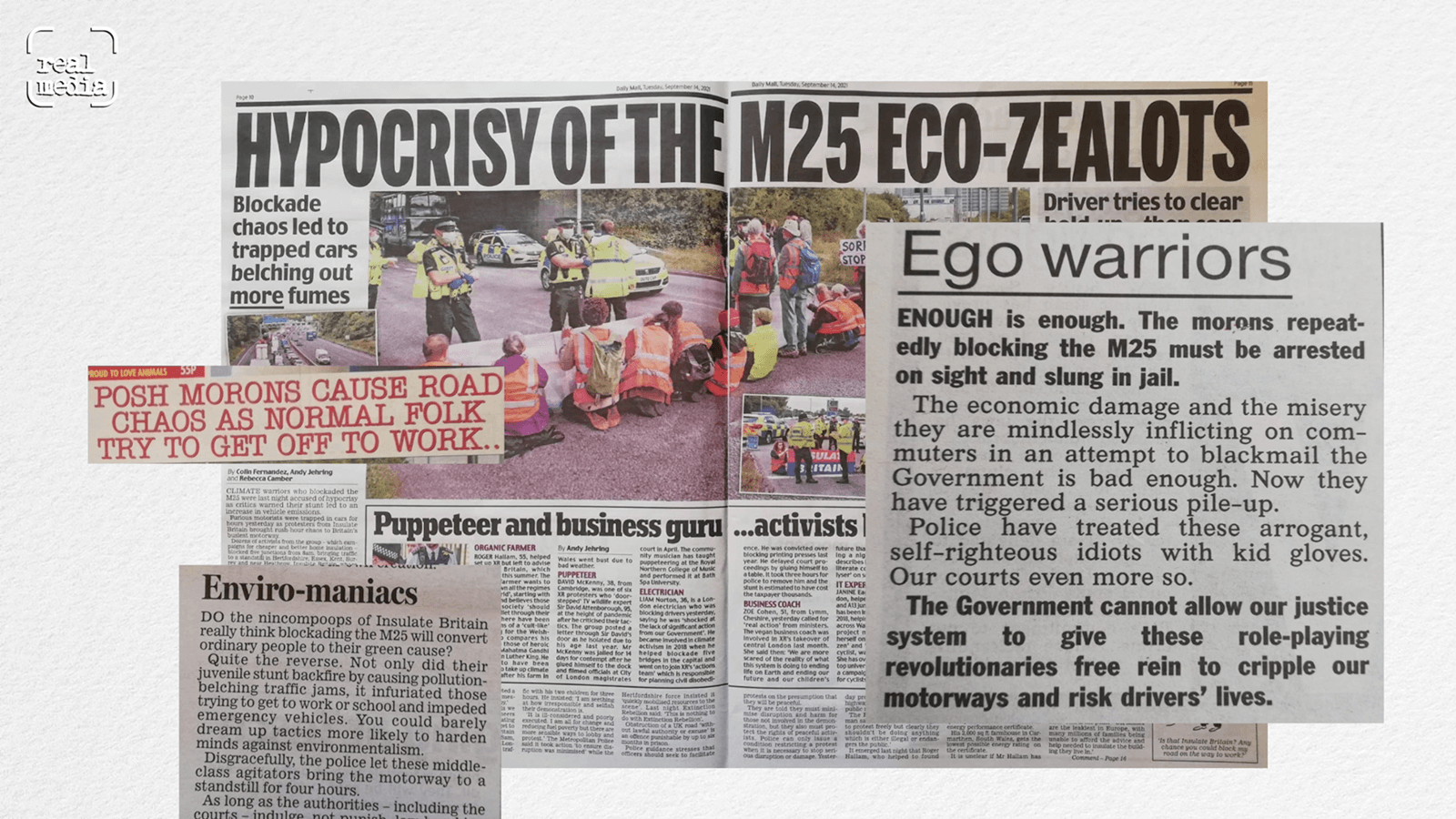 Through the use of private legal sanctions rather than parliamentary law, it didn’t take long for a High Court judge (with strong family connections to the fossil-fuel industry) to find ecologist Emma Smart in contempt of court, for breaching an injunction designed to prevent her sitting on the M25. She, along with eight other peaceful climate protesters, spent months in prison without any trial by jury. There, she began a hunger strike, which finally ended after more than three weeks when her MP Richard Drax agreed to meet her.

Insulate Britain’s main demand was a call to retrofit insulation on UK’s social housing, with a price tag of £5 billion over four years. As Moran points out in her article, the recent proposal of small rebates on soaring energy bills would cost far more, and would not have the long-term benefits of insulation. Today’s speculation that new PM Liz Truss will announce a freeze on energy prices costing £100 billion, and ultimately payable back by consumers, looks like economic madness by comparison.

Insulation would also provide cost benefits that are less visible and quantifiable, such as relieving pressure on the NHS. Research commissioned by Shelter reported last year that 1 in 5 UK renters suffer health problems due to poor housing, with mould, condensation and cold among the main issues.

A large group of Conservative MPs, peers and councillors issued a public call last month for the new Prime Minister to embark on a programme of home insulation – it looks very much like Insulate Britain’s demands.

Emma’s period in prison did nothing to dissuade her or others from continuing a programme of direct action over climate fears, with a government about to licence NEW oil and gas exploration in the face of science and international concern.  She was arrested again among other scientists at a protest at the Dept of Business, Energy and Industrial Strategy in April, and has taken part in various Just Stop Oil protests this year.

A couple of weeks ago Emma was arrested on suspicion of ‘conspiracy to commit public nuisance’, and was remanded to prison in Peterborough where she has been treated very badly by prison authorities despite not being convicted of crime. Emma has engaged in peaceful non-compliance throughout her incarceration.

Last Friday, supporters reported that prison staff had violently assaulted her, leaving her face down on a cell floor covered in blood and urine. She was then moved into ‘segregation’ ie solitary confinement. Previously, Emma had complained about staff bullying of inmates who had mental health and learning difficulties.

She was not seen by a nurse for several hours after the incident, but tissue swelling and damage to wrist, arm and shoulder were all eventually recorded, and she was promised a GP visit in the following days. As a result of many phone calls and emails to the prison, its Safer Custody team have agreed to photograph her injuries and have given her a vegan food pack. The Independent Monitoring Board also visited her yesterday and wrote a report including her injuries.

BREAKING NEWS: Emma, along with three other Just Stop Oil activists have all had bail hearings today and are set to be released at any time.

With the Public Order Bill likely to be pushed through Parliament under the new Prime Minister, it is likely we will see a huge increase in the numbers of peaceful climate prisoners over the coming months. An HS2 protester has just been released from prison after a successful appeal, but three Just Stop Oil activists are currently on remand for several weeks after tunnelling under approach roads to disrupt deliveries near an Essex Oil refinery.

With rapidly increasing public awareness of the climate emergency, along with inevitable food supply and cost of living issues, it’s hard to see how a government will be able to keep a lid on civil resistance, especially a government whose leader was elected by a tiny unrepresentative minority, trying to push through policies that were never put to a public vote.

Mass Trespass to Save Ancient Woodland from Center Parcs development

Dr Bob Gill GP – Our NHS – from public to private