“I am committed to ensuring that the police have powers required to tackle the disruption caused by groups such as Extinction Rebellion and I will be looking at every opportunity available, including primary legislation, to ensure that there is a full suite of tools available to tackle this behaviour. We must defend ourselves against this attack on capitalism, our way of life and ultimately our freedoms.”

Three years ago, Policy Exchange, a right-wing thinktank with close ties to No.10’s policy unit, released a report attempting to portray Extinction Rebellion as a terrorist organisation, and calling for changes to the law to shut down their protests.

Part of Extinction Rebellion’s messaging has always been that our “democracy” has been corrupted by the climate denial industry, and that the current UK ‘representative’ system favours economic power over the needs of the majority of the population. It has also challenged the economic hegemony of endless growth on the simple basis that pursuing growth makes meeting environmental targets more difficult if not impossible. A new breed of economists like Kate Raworth and Steve Keen offer alternative approaches which serve people and environment.

Policy Exchange is part of the Tufton Street Brexit Nexus which ties together fossil fuel interests, climate denial groups and a whole array of Brexit campaigns, pushing for a deregulated low-tax playing field pushing profit and growth over people and planet. As well as close ties to most of the current Conservative right politicians, they reach deep into the media, influencing the output of the Telegraph and Spectator, as well as the Times, Mail, Express and Sun.

The Policy Exchange report was promoted in the Lords and the Commons respectively by Tory coal baron peer Matt Ridley and by Tory MP Steve Baker – who were advisor and trustee at The Global Warming Policy Foundation (GWPF), a climate denialist Tufton Street group. GWPF has now changed its name to Net Zero Watch, actively lobbying to water down 2050 net zero plans, and planting news stories and social media posts to influence public opinion away from sustainable initiatives and towards continued support for fossil fuel extraction.

Policy Exchange funding remains opaque, but as well as receiving around £3million per year from undisclosed donors, it has received ‘sponsorship’ money from many UK energy companies for arranging meetings with government ministers, and these included Drax, E.On, Centrica, and lobbyist Energy UK. It also receives money from ‘American Friends of Policy Exchange’, a US non-profit organisation supporting Policy Exchange UK and backed by mainly anonymous donors. They were listed in a 2017 ExxonMobil worldwide-giving report  as receiving a $30,000 donation from the giant fossil fuel corporation. ExxonMobil has spent vast sums over decades on promoting climate denial.

A few months after the report was published, it was revealed that Extinction Rebellion was listed as an extremist ideology to be referred to the Prevent programme. In the subsequent furore, the reference was described as an error and removed, but it is widely agreed that the report was influential in the drafting of the Police, Crime, Courts and Sentencing Act, which places new draconian restrictions on protest, criminalises many peaceful actions, and disproportionately targets various minority groups, notably people of colour and Gypsy, Roma and Traveller communities.

Policy Exchange also funds something called the Judicial Power Project which seeks to limit the rights of our justice system to rein in the power of government ministers or question unfair or draconian legislation. Under the guise of concern over “how and by whom public power is exercised”, it’s basically pushing for more power for heavily-lobbied ministers along with less accountability to a judicial system that may be more resistant to corporate influence.

As reported by Real Media earlier, there is a lot of recent and upcoming legislation which erodes rights won over decades, opening the path for further deregulation and privatisation while making the government less accountable and democratic challenges more difficult.

Papers published by the project include calls for amendments to the Overseas Operations Bill (giving soldiers impunity for war crimes) and for government control over appointments of judges, as well as a major study on “judicial interference” over the government’s Rwanda deal and other anti-asylum proposals. The project strongly influenced the tabling of the Judicial Review Act, which limits citizens’ ability to challenge government decisions in court. 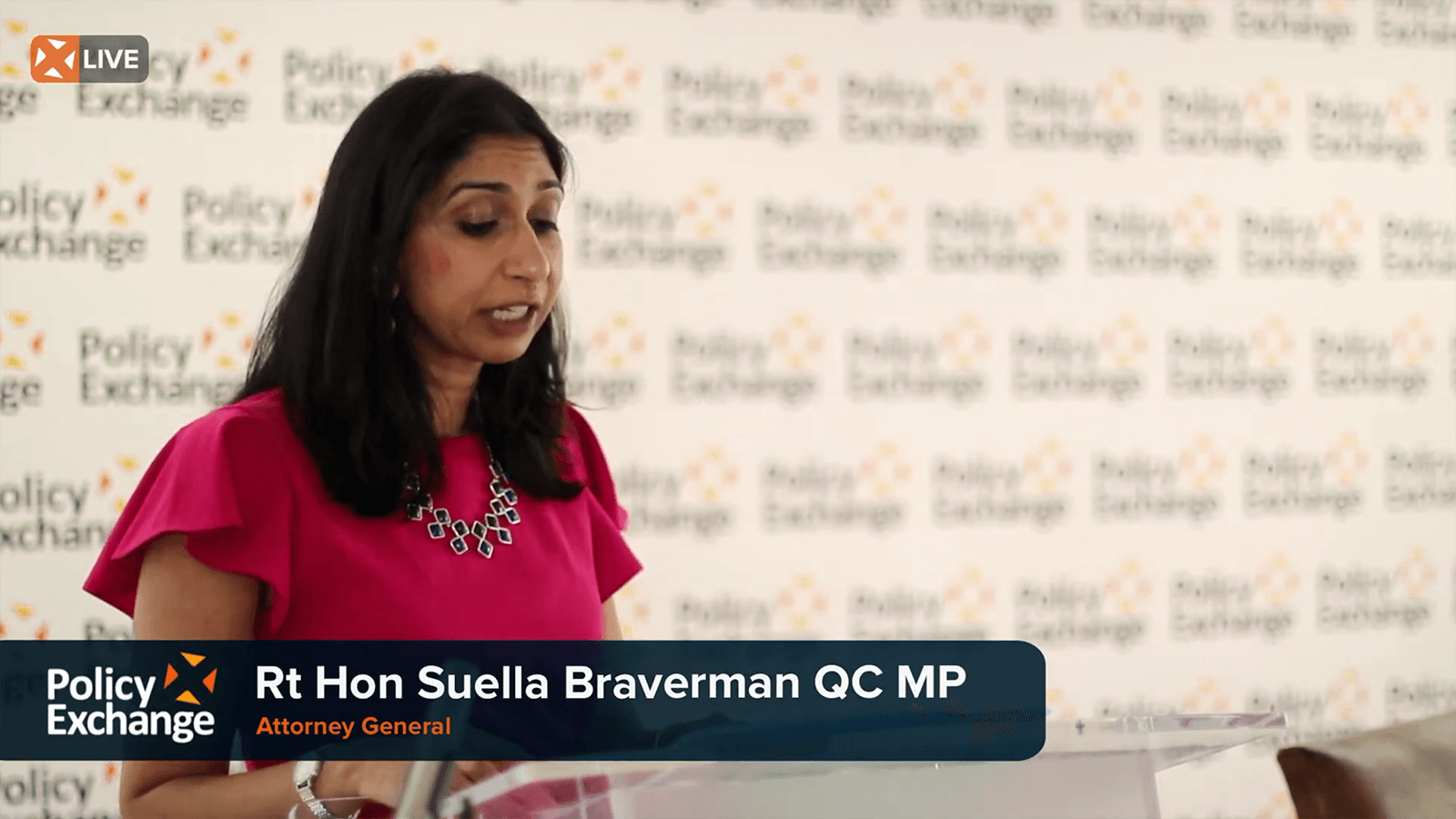 Earlier this month, the Attorney General Suella Braverman gave a keynote speech which was introduced by Dean Godson, the director of Policy Exchange. He received a peerage from the Conservative government in 2020. Braverman’s speech on Equalities and Rights might as well have been written by the Judicial Power Project, given her opening thanks for their “thought leadership”.

She blames the European Convention on Human Rights and the UK Human Rights Act for radically changing how human rights are protected in the UK and heralding an alarming ‘rights culture’ in a way that didn’t exist before 1998. Railing against Critical Theory, she describes the theory of ‘a hierarchy of oppression’ as an anti-Western pseudo-science.

She complains about the time and resources spent on Equality and Diversity training in the civil service, dismisses the concept of unconscious bias, and asks how her voters in her constituency of Fareham would consider this to be value for taxpayer’s money. (Fareham is predominantly white with well below average unemployment).

Braverman also referenced recent court judgements that allowed arms trade protesters to walk free after obstructing the highway outside the DSEI arms fair in 2017 (the Ziegler ruling), and the ‘Colston Statue Four’ to be acquitted by a jury deciding the toppling of the statue was a proportionate protest. After referring both cases to the Court of Appeal she is awaiting rulings that could limit or even remove the idea that a protest action might be a proportionate response to highlight injustice or grave danger.

“There is a now serious risk that the fight for rights undermines democracy” says Braverman, welcoming the new UK Bill of Rights as “a further step towards taking back control”, championing government reforms to the Human Rights Act to “prevent trivial human rights claims from wasting judges’ time and wasting taxpayer’s money”.

Not ALL rights are under attack from a Policy Exchange-influenced government however. In 2020 they released a policy paper called ‘Academic Freedom in the UK’ outlining the need for an Academic Freedom Bill, on the basis that pro-Brexit and right-wing academics felt they needed to avoid expressing their views or directly self-censored. The paper cited a YouGov poll of just 820 academics – nearly half of whom were retired. Unfortunately despite the bad science, and reservations about the need and scope of such legislation the resulting Higher Education Freedom Of Speech Bill is now before Parliament.

The only other countries that have exited the European Convention on Human Rights were Russia (after invading Ukraine), and Greece (after the military junta in 1969).

In the 12 years of Conservative rule, according to the Sunday Times rich list, Britain’s 1000 richest people have increased their wealth by around £500 billion. Many of these are Tory donors. Some almost certainly sponsor the work of Policy Exchange. Among them will be captains of industry, whose profits may be dented by wage claims. Others run polluting industries or arms companies, which may have their work briefly disrupted by peaceful protests.

While Braverman talks about restoring democracy by removing rights, we have to bear the unedifying spectacle of two wannabe leaders trying to appeal to a tiny non-representative selection of fewer than 200,000 citizens with an assortment of dog-whistle promises on the front pages of the usual tabloids.

Liz Truss is offering to take away workers’ rights to withhold labour at a time when inflation is soaring (while CEO pay has surged by 39%). 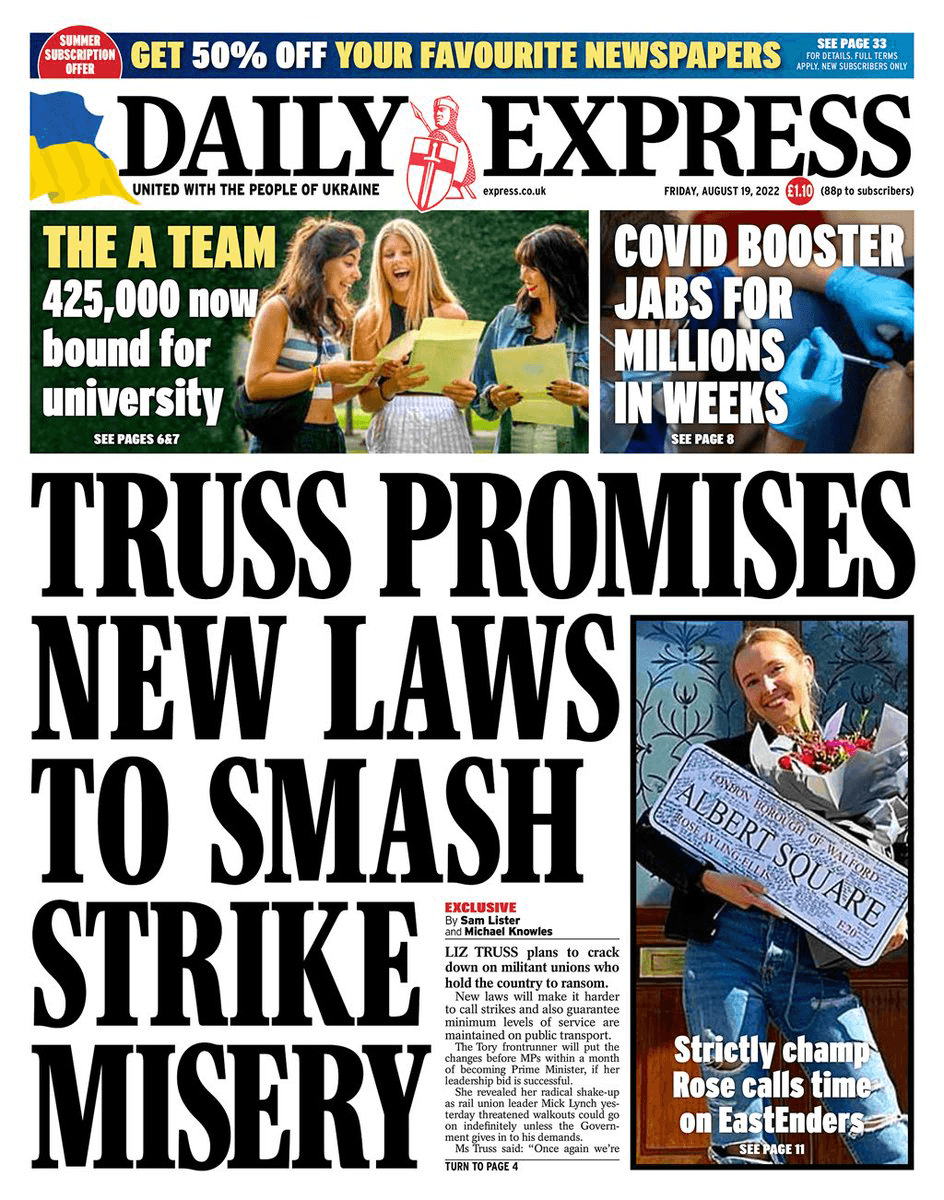 And Sunak put out a press release last week which launched a war on ‘leftie lawyers’ and in particular Jolyon Maugham of The Good Law Project, whom he named several times.

Note that the Good Law Project won a High Court ruling earlier this year that the fast lane procedure, which awarded flawed PPE contracts to companies with close government connections, was unlawful.

Neither of these policy ideas, nor many others being floated, were part of an election manifesto, so while claiming to defend the democratic will of the people, their policies will actually make it increasingly difficult to challenge or protest them

“No matter what side of the debate one takes on the scope of fundamental rights, and what the law ought to be, the primary and legitimate vehicle to resolve disagreement is Parliament.” states Suella Braverman.

This may well be right in a functioning and representative democracy carrying out the will of the people. But we are about to face a leader elected by a tiny unrepresentative club, advised by secretly-funded policy units, and cheered on by a media owned by its rich friends and donors. So when that leader promises policies to limit protest, scrutiny and justice, we should be reminded by history that this does not end well.