After the destruction of 11 trees at a McDonald’s franchise in north London, and the installation of fake plastic grass, it’s time to look at McDonald’s record on trees and sustainability, both globally and locally…

McDonald’s Chief Communications Officer, Michael Gonda was previously Vice President at Weber Shandwick, a major global PR company which has worked tirelessly to lobby for and promote such sectors as fracking, logging, whaling, tobacco and big oil – it even tendered to work for the Bahrain dictatorship.

McDonald’s Building Climate Resiliency and Protecting Nature report claims that in 2021, 97.7% of its beef, soy, palm oil and coffee commodities “supported deforestation-free supply chains”. But is this a greenwashing PR claim dreamed up in the offices of Weber Shandwick, or is it backed up by evidence on the ground?

McDonald’s beef sustainability claims rely on the principles and criteria of the Global Roundtable for Sustainable Beef, a body whose board of directors include JBS and Cargill, respectively first and fifth worst culprits for Amazon deforestation according to a recent survey which used satellite technology to track soy and cattle farming.

In Latin America, McDonald’s franchises are managed by Arcos Dorados, which claims to use satellite monitoring to deliver sustainable meat to restaurants in the region. But a recent investigation has uncovered multiple instances where cattle raised on illegally deforested farms have been transferred to ‘clean’ farms before final slaughter, raising doubts about monitoring methodology.

According to the soy and cattle tracker, the second worst Amazon deforestation culprit is Marfig. Marfig was still licensed to supply McDonald’s as recently as March this year. Investigators André Campos and Poliana Dallabrida have documented many examples of “cattle laundering”, where Marfig slaughtered supposedly “sustainable” cattle which actually had been raised on illegal farms.

In response to queries, JBS and Marfig say that there is no public information available to guarantee monitoring of ‘indirect’ suppliers to satisfactorily curb these practices, but both companies have announced long-term goals of full traceability and for many years have been signatories of a public commitment to monitor indirect suppliers.

In their Responsible Sourcing report, McDonald’s claimed in 2021 that 100% of soy feed for its chickens supported deforestation-free supply chains and that they adhere to the 2006 soy moratorium. But again there are questions around the detail.

Large corporations like Cargill grow huge amounts of soy in the Cerrado area, which is characterised as savanna, not rainforest, and much of it is still not covered by zero deforestation commitments (ZDCs).

Although European and North American companies are beginning to address sustainability and are pushing back against Jair Bolsonaro’s disastrous environmental policies, there is a major issue around a just transition for the farmers who rely on growing soy.

In a recent letter André Nassar, the President of Brazil’s soy farmers’ trade association, Abiove, complained that a plan to offer farmers around $20 million as compensation for extending the moratorium across Cerrado was inadequate, citing a figure closer to $300 million.

Meanwhile the space agency INPE reported that satellite data shows record-breaking increases in wildfires across Cerrado, and experts say a large proportion of these are started deliberately to clear land for ranching and farming.

Finding a fair and just transition for Indigenous and local farmers, while moving away globally from intensive beef and soy farming is admittedly a complicated and multi-dimensional problem, but it seems likely that McDonald’s bold claims around deforestation are open to challenge and that the figures conjured up by the Weber Shandwicks of this world are exactly what they are paid to produce – PR greenwash.

In Haringey in north London, during the recent week of record-breaking temperatures in the UK, a mixture of 30 year-old plane and lime trees, eleven of them in total, vanished from outside of a McDonald’s drive-through outlet in Haringey. The culprits then covered the area with plastic grass. 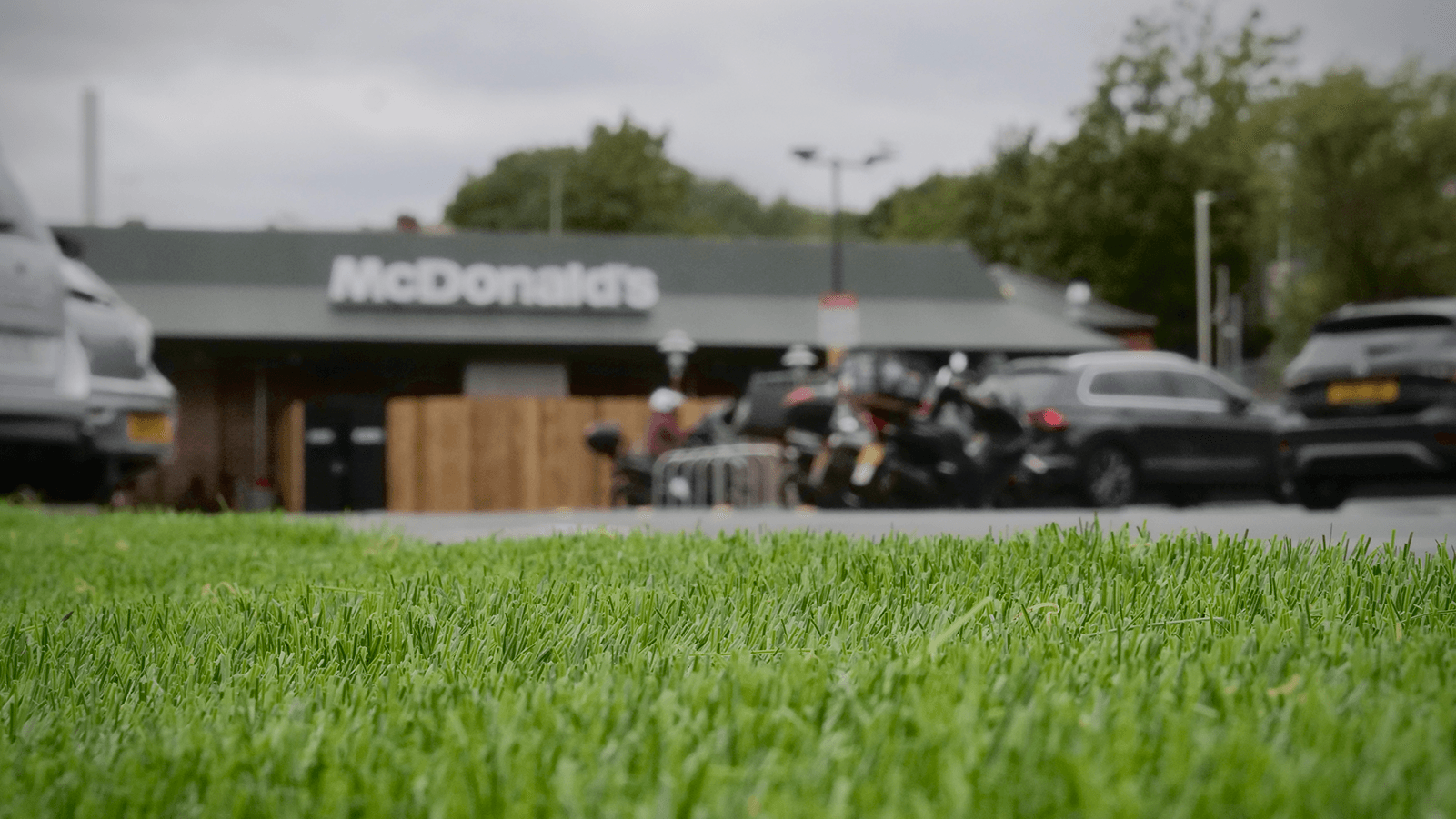 The McDonald’s franchise owner had applied to Haringey Council for planning permission for minor refurbishment and alterations, including resurfacing of the car park, but no tree felling was mentioned before the destruction.

Local residents who were already working to protect a nearby tree from council felling, quickly mobilised and gained support from local MP David Lammy and naturalist Chris Packham among others. They are demanding that the plastic grass now be replaced by wild flowers, real grass and new trees. In the i newspaper, Catherine Nugget from The Woodland Trust said that at least 22 saplings would be required in order to begin effective replacement for the loss.

Multiple studies show the important cooling effect of trees, and it’s been discovered that they even have a role in cloud formation. They also help prevent flash-flooding (of the type that occurred at this very spot just one year ago). Artificial grass is an environmental disgrace – a barren habitat for wildlife, a fossil-fuel product, and it actually helps to raise urban temperatures.

On Sunday evening a protester apparently painted the question “McDonald’s – why did you kill the trees?” on their fencing for all to see. Activists are also calling for a protest at the site (which is next to Harringay Green Lanes Station) on Saturday morning.

In Bracknell just a couple of years ago, the local McDonald’s outlet felled several willow, sycamore and birch trees (some with protected status) while building extensions and a new drive-through booth there.

Late last year McDonald’s announced an end to the use of plastic straws. Their beloved PR company, Weber Shandwick, commissioned a set of 15 art works on restaurant trays which were specially-made from plastic straws. With a beautifully produced video and a special web landing site, ‘The Last Straw’ is a clever campaign to promote the corporation’s supposed commitment to sustainability. No mention is made of the plastic planted instead of grass outside their franchise.

Perhaps cutting down trees, and planting fake grass is all part of Weber Shandwick’s next campaign where they can trumpet the reduction in water which they use at restaurants as a result of this ecocidal damage.

“Trust is a lot deeper than talking the talk, it’s about the actions we take.”