In March 2019, Haringey Council declared a climate emergency, passing a motion with various commitments and promises, including “bold, radical action”, “innovative solutions”, an aim of carbon neutrality by 2030, and a promise to “deliver this new goal through all relevant strategies and plans”.

In November last year Council leader Peray Ahmet is quoted as saying that “climate change is a social justice issue” and promised that from now on “all council projects must positively affect carbon emissions”.

But actions speak louder than words, and campaigners who are trying to prevent the felling of hundreds of mature trees in the Borough feel the Council is not only not listening to them, but is actively attempting to control the narrative and minimise their voices.

Real Media reported previously on the battle to save a tree in Oakfield Road. In summary, two houses near the 100 year-old plane tree have suffered some subsidence. The two insurance companies involved, Allianz and Aviva, both claim the subsidence is caused by the tree and therefore will not pay out, instead ordering the council, who ‘own’ the tree, to remove it. 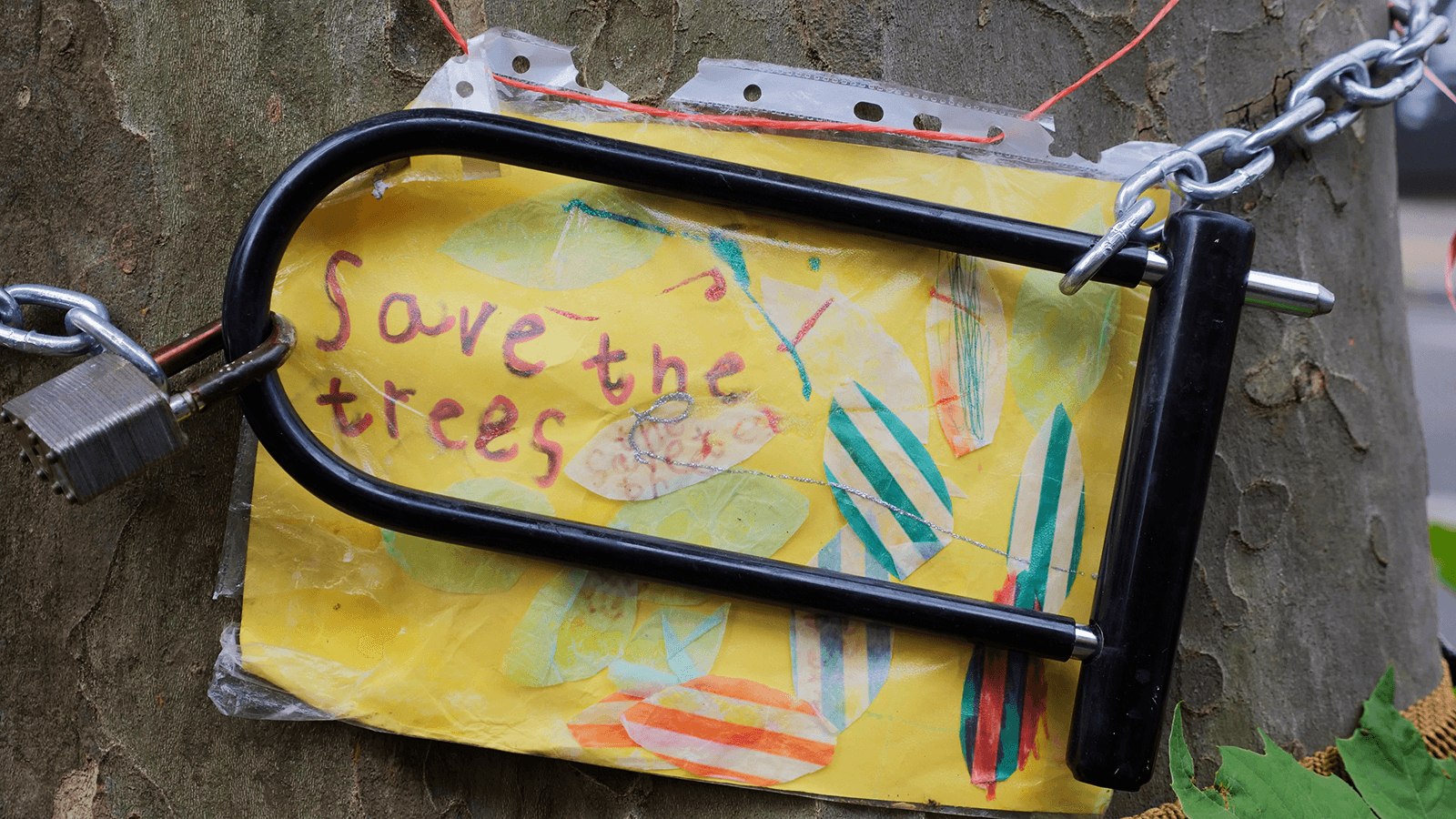 Campaigners have uncovered that whenever a tree can be claimed to be “implicated” in a subsidence claim, insurers dodge the financial bullet and pass costs on to the public. This is going on all over the country on an industrial scale – 200 trees are under threat across Haringey alone. A report in 2017 revealed around 10,000 trees a year are felled around the capital.

The council say the alternatives to felling will be too expensive, and promise to plant new trees, but campaigners have been pushing for other solutions. They point to nearby examples of subsidence where no trees are involved, and they say that ground on Oakfield Road, which is a clay soil hill, is likely to be shifting around due to climate patterns of warmer weather and less rain.

They want the Council to remove concrete from around roadside trees, planting shrubs and flowers in new ‘tree pits’. This would encourage community watering and irrigation, feeding the trees and stopping their roots from searching outwards for moisture. The irrigation, which could partly come from household waste water, would moisten dry ground, having a beneficial effect to lessen subsidence generally.

This approach could bring communities together in caring for their streets, and brighten the environment. Studies show a vast range of benefits derived from tree canopies and vegetation – lower crime, lower depression, cleaner air, and cooler pavements.

For weeks, local tree protectors have kept a 24-hour vigil up. A local councillor, Eldridge Culverwell, broadly supportive of the protest, wrote to Mike Hakata (Haringey’s Cabinet Member for Climate Action, Environment and Transport) two months ago, asking for a public meeting, and feeding in the campaigners’ agenda.

In response, Hakata simply suggested an “informal” meeting in the street at very short notice, but the tree protectors have been trying to get him to hold a proper public meeting for several weeks since.

A date was finally agreed for a meeting at a local school on Thursday evening (7 July), but the council delivered their Notice To Quit a couple of weeks before, with the threat of a Court Order to enforce it. Hakata also wrote to the campaign just days before this week’s meeting demanding that it should be chaired and controlled by the Council, with just a short question and answer session, and would not be allowing any presentation by the campaign.

The Council say they are constrained by current law and financial expediency – the campaigners want to work as allies to challenge the legal framework, which is no longer appropriate in a climate crisis. They feel the Council has been unwilling to explore alternatives.

This story is about one tree in Haringey, but for the Haringey Tree Protectors this is just a front line, with hundreds and thousands of trees facing similar fates because of an unsustainable and inappropriate legal framework – where the profits of corporations are more important than our urban ecology and environment.

More info and ways to support at linktr.ee/TreeProtectors 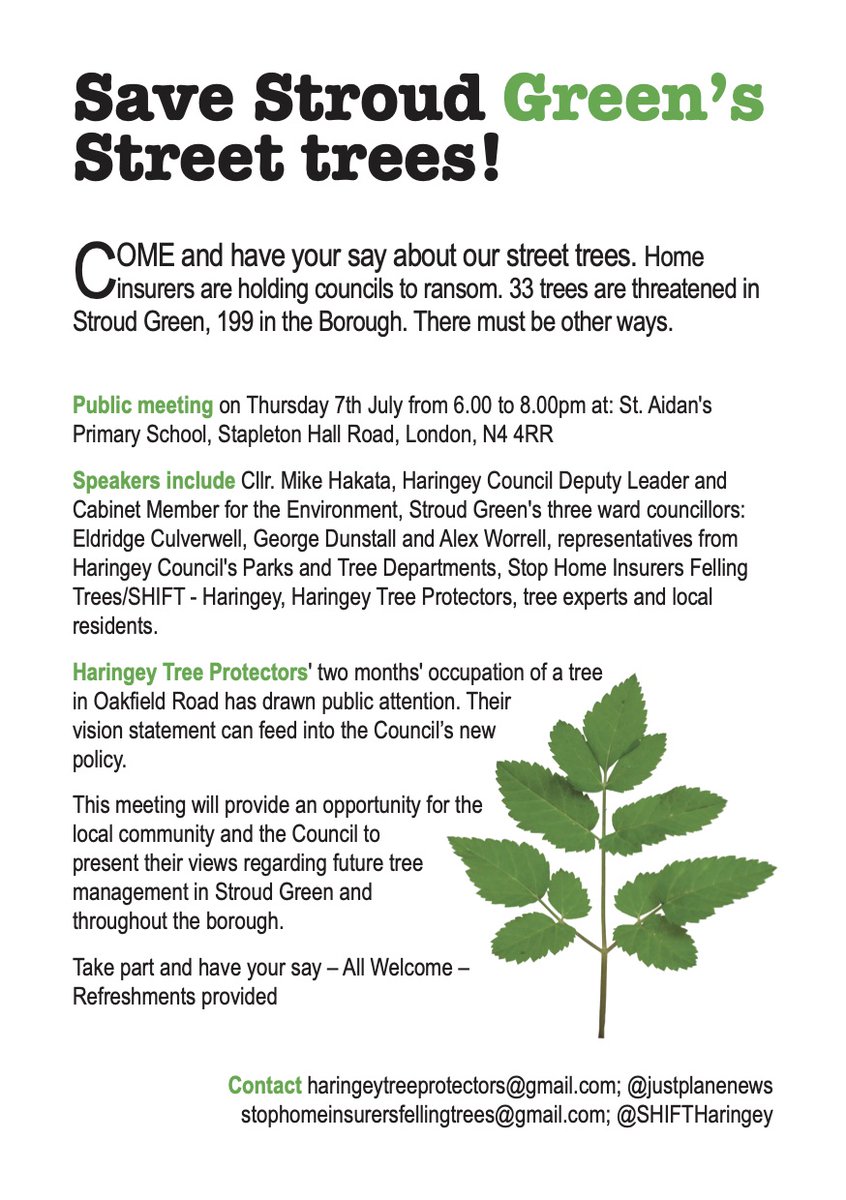