RBS’ property arm, West Register, sent ‘Victory Emails’ when acquiring assets from ‘distressed’ business customers, at the same time as its turnaround unit was deliberately forcing businesses into these positions.

The emails are described in the Policy and Procedures manual from West Register, suggesting an advanced system of scoping, assessing and even celebrating the foreclosure on properties of the bank’s customers.

The manual was released amongst other documents by Buzzfeed in an investigation in October – an event which Business Secretary Vince Cable said now provided the ‘smoking gun’ for thousands of small and medium enterprises (SMEs) pushed into insolvency to improve the bank’s balance sheet.

In the manual, upon acquisition it was customary to send ‘Victory Emails’ to the Global Restructuring Group (GRG) West Register and the Primary Case Manager when a deal was closed – potentially on businesses artificially distressed by the GRG. 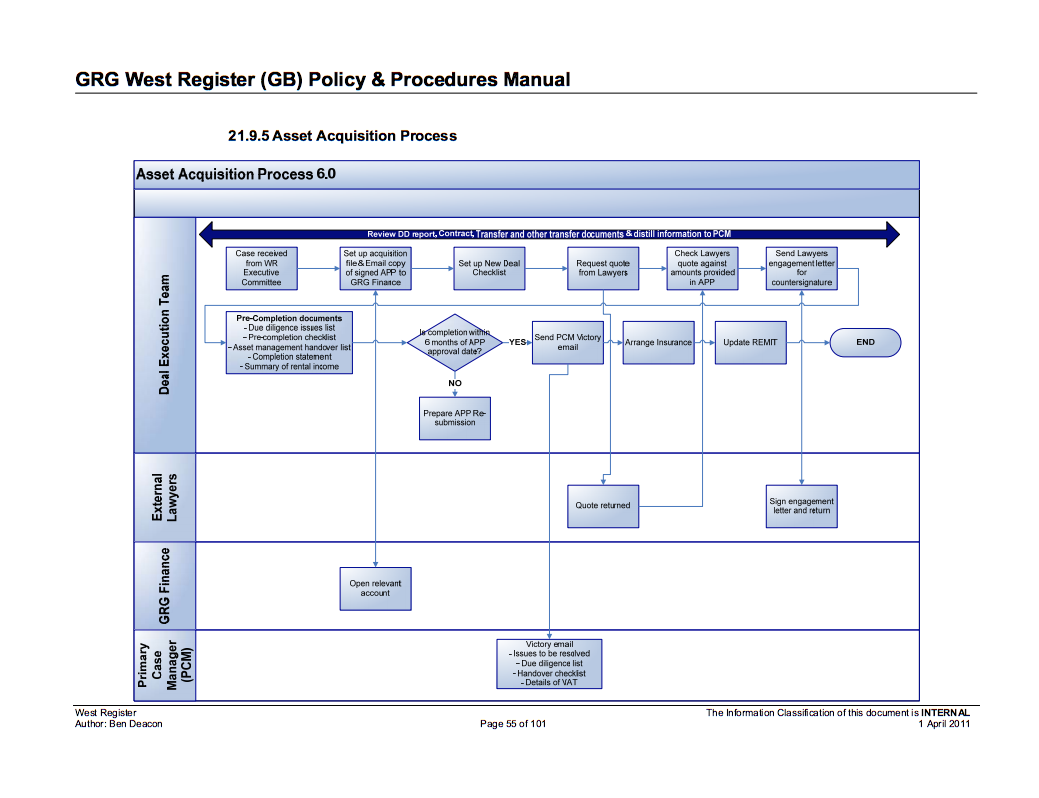 In 2014, RBS commissioned its own review into the allegations levelled at its turnaround division. The report was carried out by Clifford Chance and it cleared RBS of any wrongdoing. For many small businesses this was deemed a whitewash, and following evidence has cemented this.

In the Clifford Chance report, West Register was described as a ‘bidder of last resort’, however the manual portrays a close relationship between GRG and West Register, with weekly meetings and the passing of information on property where it is not made available to other bidders, before describing the customary ‘Victory Emails.’

RBS have long stated that these are separate companies but the Clifford Chance report admitted ‘there was no physical separation’ between bank staff responsible for advising customers and bank staff bidding for the same customer properties. The Buzzfeed investigation also explained ‘there were no Chinese walls between GRG and West Register.’

In a flow chart the manual shows successful bids are logged in the internal system REMIT before the bid is accepted in writing by the receiver, which again points to foresight of acquisition by West Register before a deal is signed off.

The debate and details here remain important two months after the Buzzfeed investigation, as small businesses and lawyers grapple with ensuring the right compensation agreements are reached against a bank that is desperate to limit reputational damage.

RBS chairman concerned over customer trust… now that everyone knows they drove businesses to insolvency on purpose https://t.co/mfNgY62jQg

RBS has floated that £400m of compensation has been put aside to deal with GRG cases, but staggeringly £100m of this will go to ‘professional administration fees’ and none will go to companies made insolvent.

This issue was raised by the All Party Parliamentary Group on Fair Business Banking – ahead of their 3 hour debate in Parliament tomorrow – on the creation of a commercial dispute resolution platform to ensure better redress for businesses. George Kerevan MP and Chair of the group, said he ‘welcomed’ assurances of transparency when dealing with redress schemes following the fallout from the GRG scandal.

Kerevan also called for clarification on several questions before compensation schemes are set out for the GRG, in an open letter to RBS CEO Ross McEwan including;

“What is the gross figure that RBS has calculated in terms of excess fees charged to all businesses that went through GRG between 2008 and 2013? It is important to clarify how much is being paid out vs how much the bank is able to retain due to the insolvency of its clients.”

Within the documents released by Buzzfeed, the 2013 GRG Budget Review shows not one year of loss is recorded or expected, and over £1bn in fees extracted from businesses. In 2014 head of GRG and West Register Derek Sach lied to the Treasury Select Committee by stating the GRG ‘was not a profit making centre.’

This points to another important element of dispute resolution. If the review and platform is to have any teeth, it needs to have powers of disclosure against banks.

Numerous businesses involved in the GRG case have been given incomplete, incorrect and even doctored documents. In an investigation released at the start of this month, Real Media covered the story of Nigel Henderson, a customer of RBS who lost his business to the GRG’s previous form Specialised Lending Services (SLS), and was told his documents were destroyed before having them released after the Buzzfeed story in October.

Standardising information so customers know what to expect and know when they have been provided information in full is vital, as are powers to extract this information where required from banks’ own internal procedures or budgets as above in GRG.

West Register was created in the recession of the early 1990’s, for RBS to take advantage of situations in which they could buy property at cheap rates from businesses in distress. The Guardian reported that at its creation the ‘activities of West Register were so sensitive that executives did not want the business to carry the RBS name, so instead called the company after the street that ran alongside the bank’s then head office.’

The Tomlinson report of 2013, which first levelled GRG allegations in a combined and serious way to politicians, suggested the bank was now using its own valuers to conduct ‘desk-top valuations’ (not visiting the property) to undervalue assets in order to trigger a move into GRG, and then put property into the West Register.

Ian Fraser, journalist and author of seminal RBS book ‘Shredded: Inside RBS – The Bank That Broke Britain’ ‘ said ‘RBS has left a trail of destruction some call a ‘corporate holocaust’ across the UK and Ireland’s SME base.’

This was an advanced system that employed several departments to distress and extract money from SMEs. The mental toll has been huge , and there have been suicides as a result of this exercise. It is important compensation is right for the business owners that remain after years of this stress.

To do that, the culture of the bank, and the ways in which they carried out these activities and even celebrated their success, must be examined.

‘Put The Fire Out’ protest at City investment firm, BlackRock

EXCLUSIVE: The Trials of Julian Assange (closed meeting at the Frontline...