Like one of those nasty nightmares that pulls the dreamer to an inevitable conclusion, it is shocking that on March 19th, 2019, in Kendal, Cumbria County Council approved the plan for the first deep coal mine in the UK in decades.

It is rather suspicious that the planning committee voted unanimously to give the green light to the diabolic plan. But then, there were no background noises of dissent in the years ahead of the planning decision that might have made the committee think twice. Quite the opposite. There was almost universal silence from the national media.

A protest staged by Keep Cumbrian Coal in the Hole after the unanimous vote by the Development Control and Regulation Committee of Cumbria County Council on 19th March. 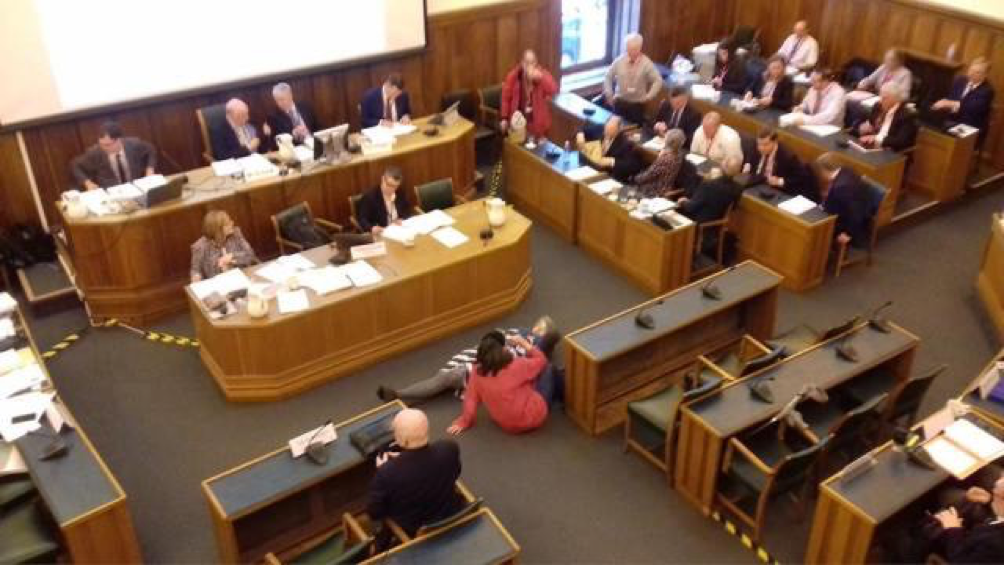 Apart from, that is, from the occasional coverage which seemed to come directly from the developer’s press releases. There were no outraged editorials or national campaigns by big NGOs. This is despite the fact that the obscene coal mine plan was rumbling nightmarishly along for so many years. Only the blogosphere was raising the alarm. Including a very strong and early shout out from Jonathon Porritt.

So close to Sellafield

Radiation Free Lakeland is a civil society group concerned with nuclear safety. We started a dedicated campaign in 2017 to Keep Cumbrian Coal in the Hole because we could see that this plan was going massively under the radar and because it is so damn near Sellafield’s growing stockpiles of highly active and uniquely dangerous radioactive wastes.

Our frustrations grew about the coal mine and the big silence from big hitters. As a voluntary group, our public reach is small.  We witnessed the aggressive PR and lobbying campaign by the developers. This lobbying by the developers included winning the hearts of green-minded folk, MPs and government departments.

Their hugely deceitful mantra of a ‘need for a massive new coking coal mine to make the steel for wind turbines’ and presenting to the public a homey image of West Cumbria Mining despite the major shareholder being a Cayman Island fund controlled via Singapore by managers based in Australia and Hong Kong.

For ourselves we had a premonition about the way this was going and crowdfunded to enable us to continue to fight the plan with a judicial review should Cumbria County Council be led down the enticing garden path to the coal mine.

At the 11th hour, it was such a relief to see some big hitters publicly putting their shoulders to the wheel to stop the mine. This included Scientists for Global Responsibility, whose Director Dr Stuart Parkinson spoke at the planning meeting stating:

“I have calculated that during the main production phase the mine would lead to emissions of over 9 million tonnes of carbon dioxide equivalent for every year it is in operation. This amount is similar to the annual emissions of over 1 million British citizens.”

Dr Laurie Michaelis, who has worked on climate-related issues for over 35 years, was a lead author on the UN’s Intergovernmental Panel on Climate Change (IPCC) and has provided policy advice for the UK government, European Commission and UN climate negotiators, said:

“Speaking to you feels like possibly the single most important thing I’ll do in my life….Your officers have not obtained suitable expert advice to correct the misinformation…When coal is used to make steel, 99% of the carbon content ends up as CO2 in the atmosphere….Thousands could die early because of heatwaves, disease and other causes. You will share responsibility with WCM, steel manufacturers and final users. If you refuse, coal might be sourced elsewhere; that’s the kind of argument people often use to justify wrongdoing. You can prevent this coal from being used.”

While we have as a group been lobbying climate activists to actively oppose the coal mine,  we have also been campaigning on the uniquely dangerous environmental impacts of this coal mine.

The close proximity to Sellafield’s stockpiles of highly active radioactive wastes could have catastrophic impacts not just for Cumbria but for the whole of Europe. The deaths resulting from a seismically-induced catastrophe at Sellafield could be in the millions, not the thousands described by climate scientists as a result of climate impacts from the coal mine.

Despite this, the Office for Nuclear Regulation has washed its hands of any responsibility and has provided the county council with an excuse to be nonchalant about the close proximity of the mine to Sellafield. The ONR’s official remit to consult on planning applications is 7.4 km from Sellafield. The coal mine extends to 8km from Sellafield i.e. 600 metres difference. 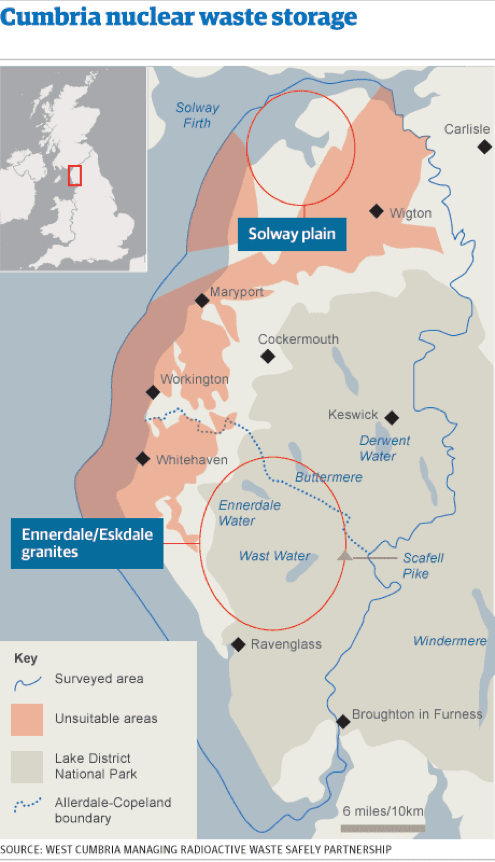 Government map showing the ‘unsuitable areas’ for ‘geological disposal’ of nuclear wastes eg coal deposits in pink – the pink area adjoins the ‘suitable’ area of the Irish Sea – the pink area (Whitehaven/St Bees/Irish Sea) is now the only place in the UK to have planning consent to put deep mining infrastructure in place.

It has not gone unnoticed by Radiation Free Lakeland that the coal mine plan extends to right up to the area under the Irish Sea that has been earmarked ‘suitable’ as a possible site for the geological disposal of the decades of nuclear wastes resulting from the nuclear military industrial complex.

Nor has it gone unnoticed that there is a revolving door between the government body tasked with “facilitating geological disposal” and West Cumbria Mining. Mark Kirkbride, the CEO, has a portfolio which includes “deep geological disposal investigations” while Steve Reece, formerly Operations Director of West Cumbria Mining, is now Head of Site Evaluation at the government body Radioactive Waste Management. 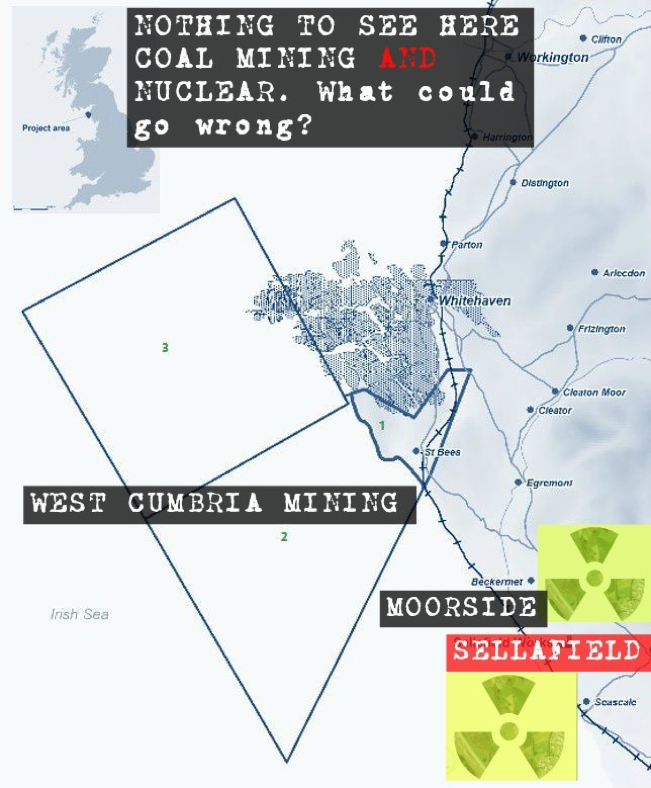 Image based on WCM’s own map

It seems to us, suspicious creatures that we are, that the silence over this diabolic new coal mine has been almost deliberate, almost like a Defence Advisory notice has been issued on this coal mine plan. A coal mine which has, ironically the full support of the nearby nuclear industry!

The Guardian told us that they would ‘report on the plan when a decision has been made.’ And true to their word they did. What they and other media outlets did not report was that the folk who have been actively campaigning against the plan from the beginning are nuclear safety campaigners. That has not been mentioned anywhere in the national press, neither has the close proximity to Sellafield, with one exception – the German Newspaper, Taz.

This coal mine should have been stopped as a result of public outcry on climate grounds alone, but it wasn’t because the public has effectively been kept in the dark about it. Why?

ACTION! ASK THE SECRETARY OF STATE TO CALL IN CRAZY COAL MINE DECISION

On Wednesday 10th April Keep Cumbrian Coal in the Hole delivered a petition to the Communities Secretary, James Brokenshire MP, asking him to call in the crazy coal mine plan.

Tim Farron MP has already backed this and we have also written on behalf of Keep Cumbrian Coal in the Hole to the Secretary of State, asking that the decision by Cumbria County Council approving the Coal Mine is called in.

We believe that the more people and groups that write and request that the Secretary of State calls in the decision made by Cumbria County Council, the better because a show of force will demonstrate the strength of feeling against the mine.

The letter should be addressed to James Brokenshire MP, the Secretary of State. james.brokenshire@communities.gsi.gov.uk.

Our full letter can be found here – even a paragraph would be good to send to the SoS – the main point to make is that West Cumbria Mining has not given figures on CO2 emissions. There are no independent assessments. There has been no detailed scrutiny or debate on the close proximity of deep mining to Sellafield’s high-level radioactive wastes.