By Chloé Farand and Mat Hope

Have you ever strolled through Mayfair and wondered where all the money comes from? With the economy slumping as the government clings on to the idea that its austerity policy works, it surely can’t be coming from these shores.

A major new investigation published by DeSmog UK has identified a hub of a dozen companies based around Mayfair, drilling for oil in Africa, and making use of tax-havens in British overseas territories and crown dependencies such as the British Virgin Islands, the Cayman Islands and Jersey.

DeSmog UK’s Empire Oil investigation shows these companies are using the secrecy laws of offshore accounts while operating in some of the world’s most unstable regions. 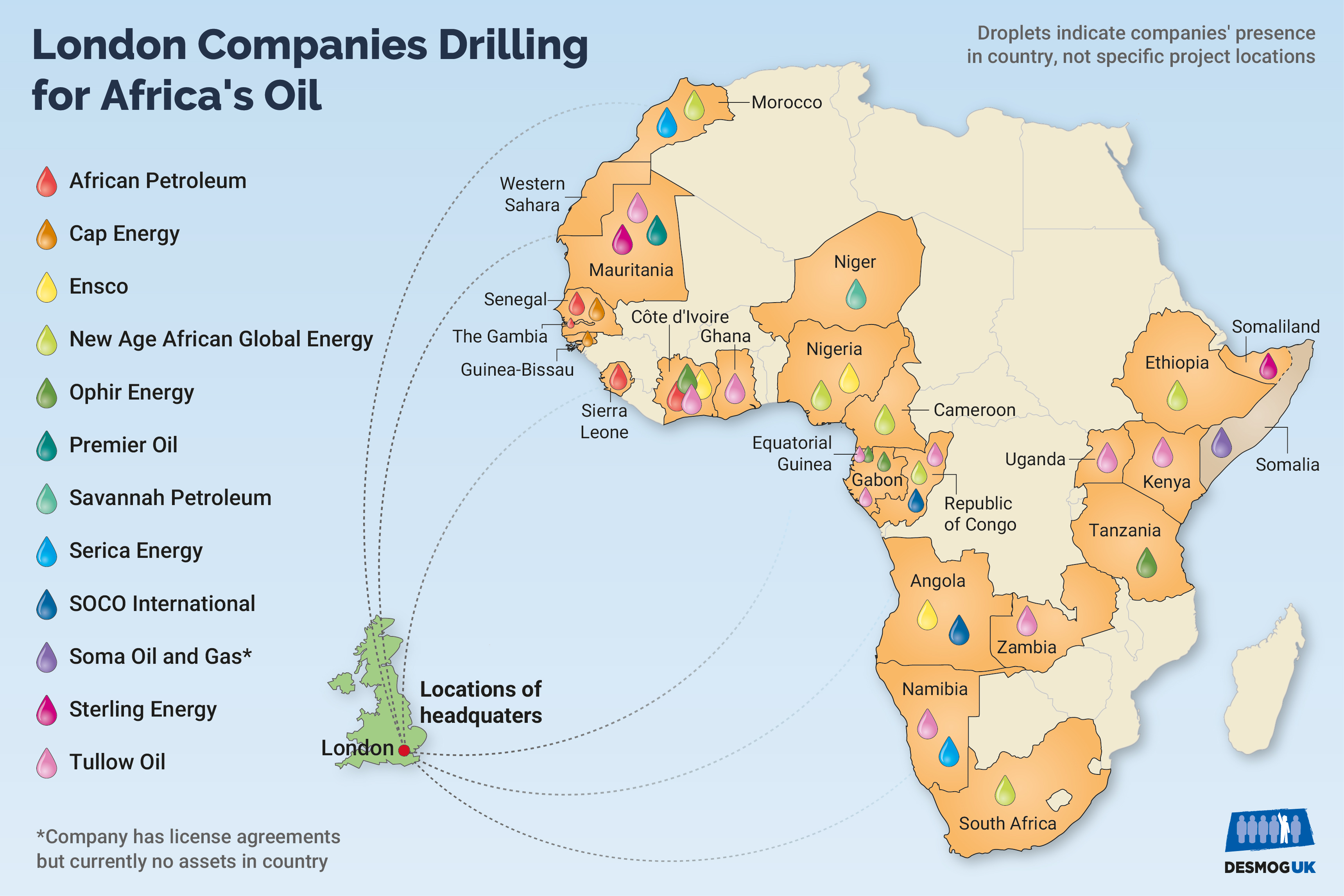 For instance, London-based New Age African Global Energy was formed in Jersey in 2007 by Steve Lowden, an oil veteran who previously held senior roles at Marathon Oil and Premier Oil. The company is backed by US hedge-fund Och-Ziff, which had to pay more than $400 million (£295 million)  in bribery settlements following an investigation by the US government that found the company had paid more than $100 million (£74 million) in bribes to government officials in Libya, Chad, Niger, Guinea and the Democratic Republic of Congo to secure natural resources deals and investments.

The director of the Securities and Exchange Commission’s enforcement division Andrew J. Ceresney, said: “Och-Ziff engaged in complicated, far-reaching schemes to get special access and secure significant deals and profits through corruption.” A lawyer for Och Ziff told a federal judge presiding over the case in New York that “Och-Ziff has taken substantial remedial efforts to improve its compliance program to ensure something like this can never happen again”, Reuters reported.

What is the London Oil Hub? What does it have to do with the #environment and political instability?

Another company, Soma Oil and Gas, was founded in 2013 by the former leader of the Conservative Party and now company chairman Lord Howard of Lympne to pursue oil and gas opportunities in Somalia.

Since its creation in 2013, Soma Oil and Gas has changed its registration address five times in central London according to Companies’ House. In 2015, it was the subject of a criminal investigation by the Serious Fraud office (SFO) “in relation to allegations of corruption in Somalia”. In 2016, the SFO closed the case because of “insufficient evidence”. No charges were ever made. Soma Oil and Gas still holds no assets.

DeSmog UK’s investigation does not identify any illegal activity. However, the companies’ London residence combined with their use of tax havens and international activities raises serious questions about the UK’s commitment to being a global leader on environmental and corporate accountability issues.

In January this year, when launching the UK’s 25-year environmental plan, Prime Minister Theresa May said she wanted “the Britain of the future to be a truly Global Britain, which is a force for good in the world. Steadfast in upholding our values – not least our fierce commitment to protecting the natural environment.”

Yet on her watch, these companies are continuing to exploit resources in the UK’s former colonies, with limited oversight, and with the government showing little appetite for reform.

At the heart of the issues is London’s junior stock exchange, the Alternative Investment Market (AIM).

AIM boasts of a “light touch” regulatory system that allows the private companies tasked with oversight – known as nominee advisors or ‘nomads’ – to also work as brokers, potentially creating serious conflicts of interest. This creates a close-knit network of almost exclusively male companies and advisors, who take advantage of AIM’s light regulation to set up polluting operations in some of the world’s most unstable regions.

The market’s oversight system has earned it a reputation as a “wild west” and a “casino” for investors.

In recent weeks, parliament has made some moves to force transparency on some anonymous offshore accounts.

The government was defeated in the UK Parliament earlier this month when MPs voted through a new amendment to the Sanctions and Anti-Money Laundering Bill which would requires 14 British overseas territories to publish registers of beneficial ownership by 2020 or face having them imposed.

But as it stands,  companies are using London’s reputation as a financial powerhouse to raise funds, while taking advantage of rules that allow them to keep ownership details hidden.

This makes public scrutiny challenging and once again demonstrates the value of independent media. With no corporate-backing, DeSmog UK is free to pursue stories the mainstream press often shy away from. But the current transparency laws are an immovable roadblock to investigation.

If the government is serious about taking on a post-Brexit role as an environmental steward and global leader on corporate accountability, it needs to do more to force transparency on this shadowy elite. It needs to target AIM.

Which NHS did you vote for?