Home Featured (RM) Assange and The Guardian – How a ‘liberal’ newspaper has jeopardised journalistic...

In April 2010 WikiLeaks released the Collateral Murder video which showed a deadly US Army helicopter attack on a group of men including a Reuters photographer, his driver and a passer-by who had stopped to help the wounded. The attack in Baghdad in 2007 left 12 people murdered. The footage was leaked to WikiLeaks by Bradley (now Chelsea) Manning, and its depiction of an identifiable war crime committed during a deeply controversial war became a viral sensation and brought the organisation a new audience, including journalists anxious to publish scoops.

Nick Davies, who then worked for The Guardian, tracked down Assange and discovered there were four huge caches of secret documents covering Afghanistan, Iraq, diplomatic cables and Guantanamo prisoner files.

An agreement was reached to co-publish with The New York Times (partly because of strong 1st Amendment protections in the US), and WikiLeaks also arranged for publication with Der Spiegel along with television coverage by C4, Al Jazeera and CNN. This additional deal may have been the beginning of bad blood between the parties.

The Iraq War Logs were published on the 22nd October, but at the same time, Guardian journalist David Leigh had obtained a leaked version of the third cache of documents, the diplomatic cables, from freelance journalist Heather Brooke, whom he immediately invited on to the Guardian team, thus bypassing an agreement with Assange over any say on what and when to publish.

When The Guardian went ahead with publication of diplomatic cables on 29th November, it attracted the greatest website traffic it had ever seen, with 4 million unique visitors that day.

The Guardian’s ongoing campaign to discredit and delegitimise Assange became overt the following month when Nick Davies reported on the sexual assault allegations. Much of what was written in that article has been endlessly trotted out as fact over many years since, without correction. But our Real Media interview with UN Special Rapporteur Nils Melzer exposes the total fabrication at play as he explains what is revealed in the original Swedish police documents he has seen.

Exploiting the gift that Assange had brought them, investigations editor David Leigh teamed up with reporter Luke Harding and began writing an unauthorised biography of Assange which they published in February 2011. ‘WikiLeaks: Inside Julian Assange’s War On Secrecy’ revealed a secret password to the huge cache of a quarter of a million unredacted diplomatic cables, disclosure of which Assange had never agreed to. 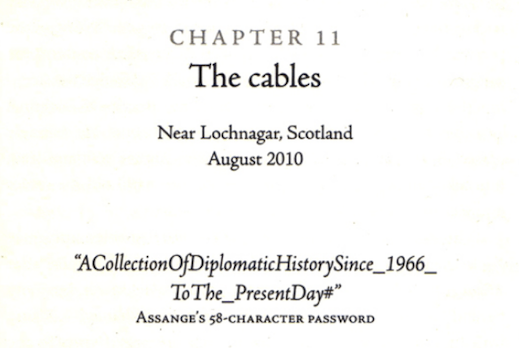 Leigh and Harding then signed a lucrative film deal with Dreamworks for The Fifth Estate, which grossed nearly $10 million at the box office.

After the unauthorised password release Wikileaks say they then spent months in damage limitation, including Assange contacting the US State Department and warning that people’s lives may be at risk. But eventually in September after the files were widely shared by the US Cryptome site, Wikileaks decided to also publish them. In his evidence at the Assange hearing, Cryptome editor John Young said that US authorities have shown zero interest in his site, even though part of the prosecution case is the claim that publication put lives at risk. This claim was certainly debunked in relation to the Afghanistan files when US Brigadier General Robert Carr told a court hearing at Fort Meade that not a single death was caused by the information leak.

The Guardian’s campaign to demonise and ridicule Assange continued over the years with story after story from a wide range of contributors as well as editorials. 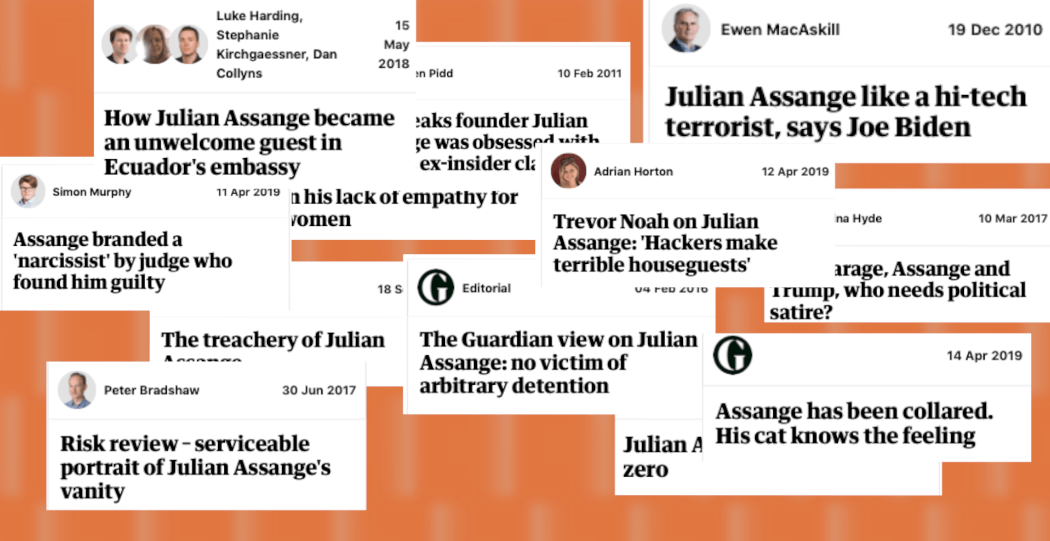 On Christmas Eve 2016 Ben Jacobs wrote a piece claiming Assange had ‘a close relationship with the Putin regime’ and had no need to whistleblow in Russia because of the open and competitive debate there. The headline claimed that Assange gave “guarded praise” for Trump. This was published at the time there were allegations of Kremlin interference in the US election and was designed to share well with its explosive claims. But not only was it untrue,  it was also second-hand journalism. It was based on an interview by Stefania Maurizi in the Italian daily La Republica, and it cherry-picked some parts into an alternative context while simply mispresenting other parts. In response to criticism from many quarters including repeated objections from Maurizi herself, The Guardian was forced to amend their story a week later, but of course much damage had been done by then.

Despite this climb down, it was only a couple of years later they were at it again with a major story linking Assange with Trump and Kremlin interference in the election. In November 2018, Luke Harding and Dan Collyns wrote a piece claiming that Paul Manafort had visited the Ecuadorian embassy three times when he was Trump’s campaign manager and suggesting it was connected to the WikiLeaks release of Democratic emails stolen by Russian agents.

Once again, this was an explosive allegation that shared well and brought a lot of traffic to the website, but the veracity of this claim was immediately questioned by a wide range of commentators including many hostile to Assange. Instead of responding to questions the authors bunkered down and left a press officer to make vague statements on behalf of The Guardian while the £350k p.a. editor-in-chief Kath Viner all but disappeared from Twitter. 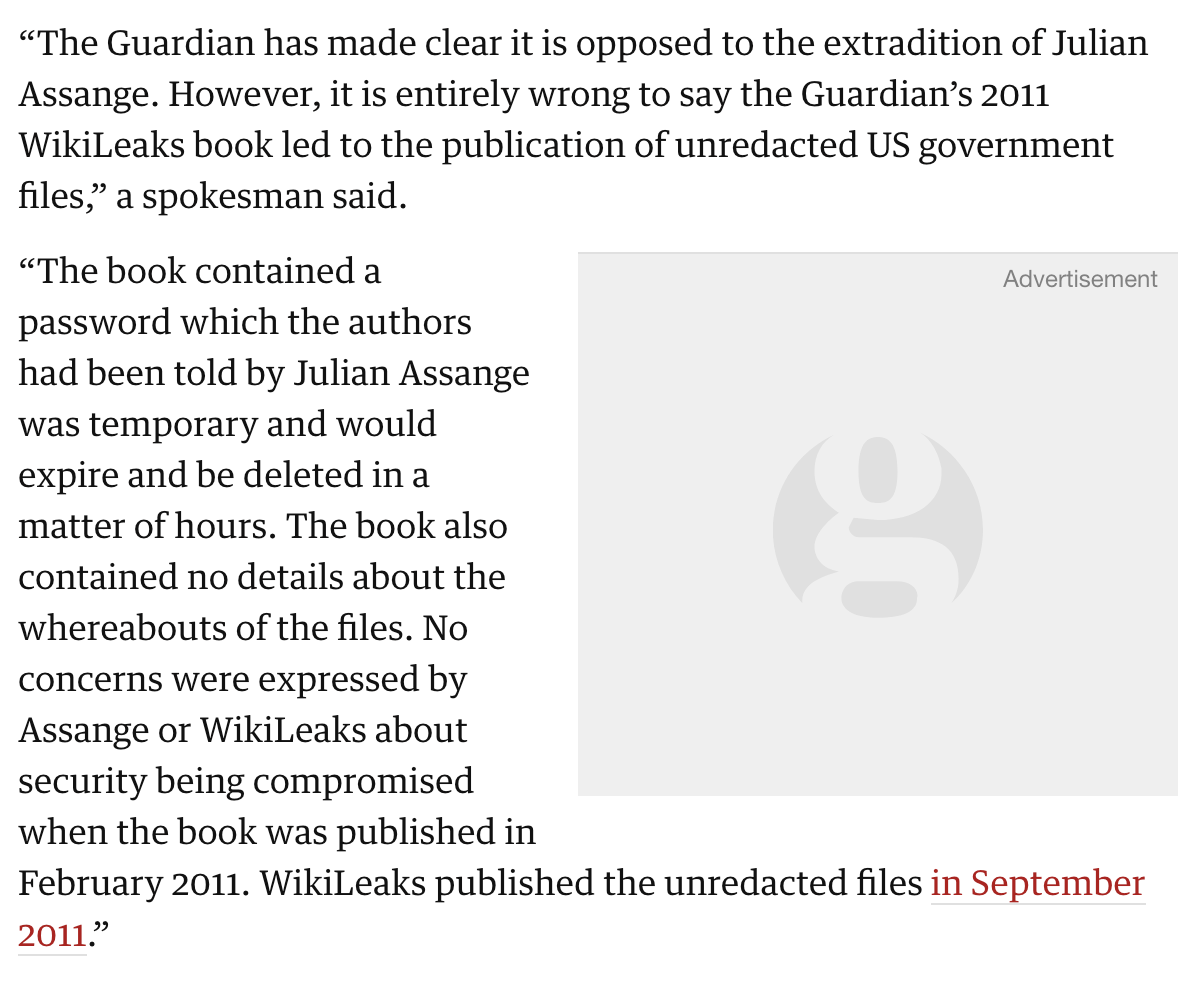 A week later, with no corroboration or substantiation of the story, even The Washington Post wrote “The Guardian’s bombshell looks as though it could be a dud”. And yet again, the paper was forced to make amendments to the original piece, although on this occasion they don’t admit to them at the end of the report as is customary. They were in fact so unsure of their original piece that a mere couple of hours later they added the words “sources say” to their dubious headline – they also changed a reference from ‘a meeting’ to ‘an apparent meeting’.

Last month, the full extradition hearing took place at the Old Bailey. In a recent meeting for NUJ members, former Guardian editor Alan Rusbridger said that he hadn’t been following the case closely as it hadn’t been meticulously reported. As Emmy Butlin says in our film of last week’s protest outside The Guardian offices, “They covered Johnny Depp’s court case more”.

At that same meeting, Assange’s lead lawyer Jen Robinson explained why this case is so important, describing it as a war on journalism pursued for political purpose.  The US indictment doesn’t just cover publication of national secrets, but seeks to outlaw receipt and possession of this material. If the extradition succeeds it sets a frightening precedent that will chill investigative journalism to its core – journalists in countries outside the United States will not only be unable to expose war crimes, but will not even be able to research whether war crimes may have been committed, without risking extradition to and imprisonment in the US.

This is about so much more than Julian Assange. The long campaign of ‘othering’ WikiLeaks and Assange will undoubtedly come back to haunt naïve journalists who will suffer in the future, and The Guardian bears a huge responsibility for this.

Many people who would regard themselves as progressive defenders of press freedom and social justice turn to The Guardian as a trusted source of news, and would see much other corporate media as propagandist. They should certainly ask themselves what is going on when they realise that this newspaper has carried out a sustained attack on Julian Assange over the past decade, leaving it up to Daily Mail columnists to rise to his defence. 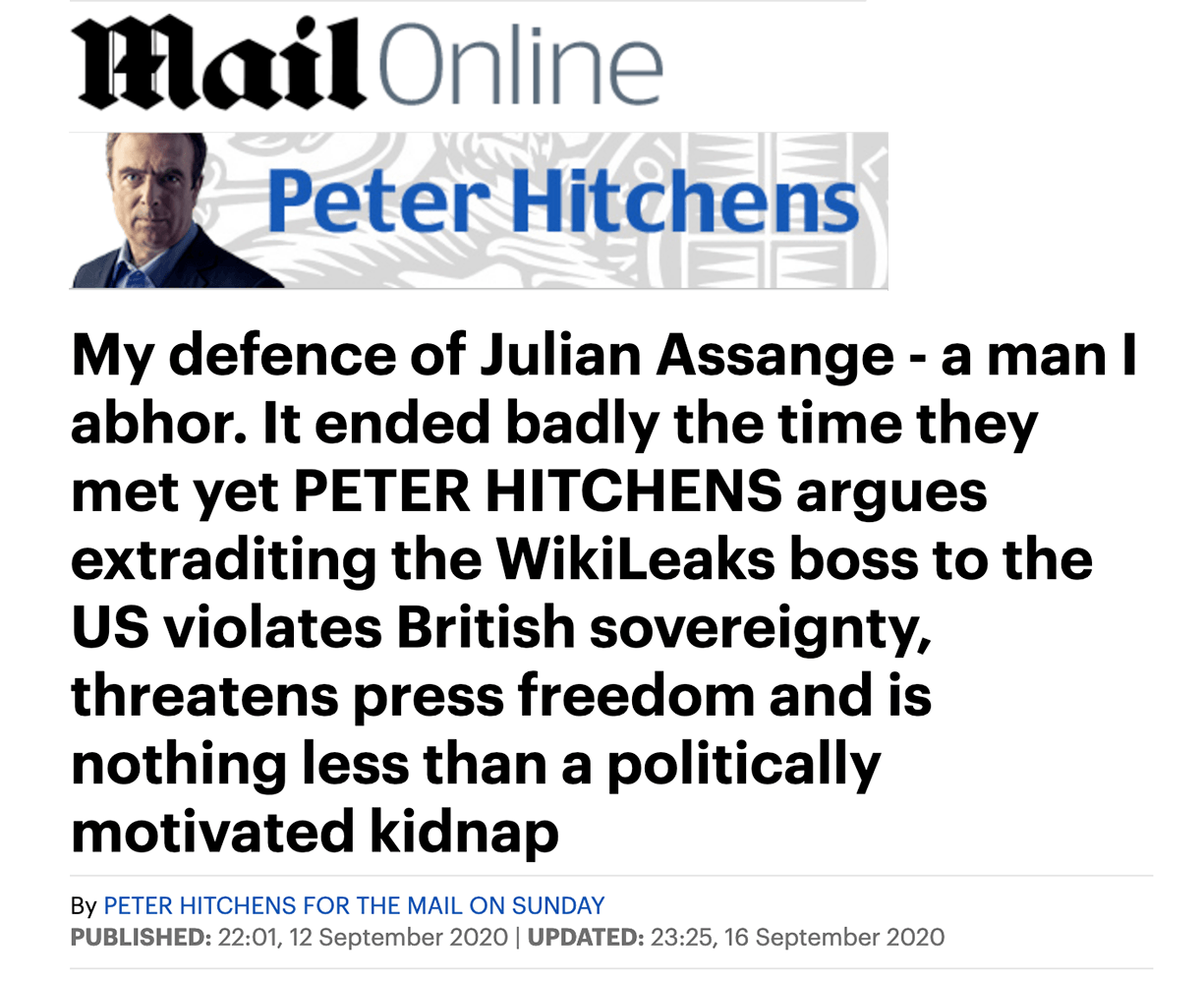 The Hole In The Wall Gang – Save Julian Assange