Few would have believed that anything like it happens in this country. Countless miscarriages of justice. Hundreds of campaigns – from trade unions to environmentalists to anti-racists to grieving families seeking justice – undermined. Undercover police officers spending years living a double life, integrating into targeted families and communities. Dozens of women abused in the most complete invasion of privacy it is possible for the state to enact.

Astonishment and a desire to know the full truth of what happened is an understandable response. However, it ignores the bigger question – why? What made the authorities so paranoid? Who gave the orders? There’s no doubting that it was sanctioned – quite possibly directed – from the highest levels of government.

London’s Metropolitan Police formed its intelligence-gathering Special Branch in 1883 to spy on Irish activists. It rapidly broadened its remit to other ‘subversives’. In 1968, it did something new.

London’s police had failed to anticipate the ferocious intensity of a demonstration against the Vietnam war. The crowd overcame the police and protesters got into the American embassy. It was hugely embarrassing for the government and, seeing the revolutionary stirrings across the Channel that year, they decided something must be done. Special Branch’s Detective Chief Inspector Conrad Dixon asked for ‘half a million pounds, twenty men and a free hand’.

The government agreed, and Home Secretary (later Prime Minister) James Callaghan decreed that the Home Office would secretly directly fund the Special Demonstration Squad (SDS). Like other increases in state power of the time, such as the Prevention of Terrorism Act, such extreme policing was intended to be temporary but actually became permanent and increased its scope.

The SDS was highly secretive. Most Met officers wouldn’t have known it even existed. Briefings were given orally. Comparatively little was written down and much of what was documented has been destroyed.

The government also keeps its dubious dealings hidden and ensures that, if discovered, any miscreants can be plausibly denied and kept at arms’ length. A secret Home Office letter from 1969 talks of fears that knowledge of the SDS ‘could leak out and criticise the Home Secretary’ and one from 1970 worries about the potential for ‘acute embarrassment for the Home Office’.

The Home Office stopped directly funding the SDS in 1989. There’s no surviving evidence of there being any accountability from that date onward. That doesn’t necessarily mean the Home Office weren’t told what was going on, and they certainly hadn’t lost interest in this type of political policing. A second unit was set up in 1999, once again with direct Home Office funding. The National Public Order Intelligence Unit (NPOIU) had a bigger budget than the SDS and a national remit, deploying the likes of Mark Kennedy.

After the spycops scandal hit the headlines in 2011, the increasing flow of revelations forced the government to finally do something in 2014. A public inquiry was announced, and it would be preceded by an investigation into links between the Home Office and the SDS by ex-Audit Commission director Stephen Taylor. Curiously, the NPOIU was not included in his remit.

Taylor spends the first half of his slender report listing places fruitlessly searched for documents, saying the ‘investigation did not identify any retained evidence available in the Department of any correspondence, discussions or meetings on the SDS for the 40 year period’ that the unit existed. Nothing. In the entire Home Office.

Time and again he found reference to a file, catalogue number QPE 66 1/8/5, understood to have covered Home Office dealings with the SDS. It has disappeared. It would have contained material classified Secret or Top Secret, which would have strict protocols around its removal or destruction, yet there is no clue as to what happened to it. They physically searched all storage facilities in the Home Office. It’s gone. Taylor can’t make allegations but rather pointedly said ‘it is not possible to conclude whether this is human error or deliberate concealment’.

The only files found were a series of letters held by police. Just 48 documents for 40 years, either dealing with funding or the SDS’ annual reports to their paymasters.

The absence of evidence is far from evidence of absence. Even the cautious and equivocal Taylor bluntly says ‘it is inconceivable that there would have been no discussions within the Department or with Special Branch… however, the nature of the SDS suggests these may not have been recorded, and if they were, there is no available record’.

Nobody spends millions without wanting something for their money. SDS funding increased fourfold between 1980 and 1985, and it’s notable that the SDS expanded into new areas at the time, such as animal rights. It beggars belief to suggest that this just happened idly and organically without serious discussion and subsequent reporting. Yet Taylor found no written evidence of the Home Office ever reviewing its financial control or value for money.

The annual reports provided by the SDS include a list of all the groups targeted, monitored and infiltrated as well as intelligence gathered. In 1983 and 1986 the Home Office asked for more detail, which proves those reports were read.

The reports from those two years show 48 and 63 groups targeted respectively. There can be no doubting that the Home Office knew which sort of political groups were being undermined.

Today, aware of the outrage at spying on Stephen Lawrence’s family, the police continue to deny they specifically targeted family and racial justice campaigns (claiming this was ‘collateral intrusion’ from spying on groups allied with the campaigns). This is contradicted by the fact that both the 1983 and 1986 reports list justice campaigns as being spied upon. Such groups have always been targeted by spycops. The denials are an insult to our intelligence and an affront to justice.

The 1987 report mentioned the arrest of two individuals ‘at great risk to an SDS officer’. This is thought to refer to Bob Lambert who had infiltrated the animal rights movement. In July 1987 he was part of a cell of three activists who planted incendiary devices in branches of Debenhams that sold fur. Lambert was to target the Harrow store, which burned down causing £340,000 of damage. He was publicly named as the firebomber four years ago (it’s something he denies, though has failed to say who else it could have been). He is currently under criminal investigation for it.

The Home Secretary at the time, Douglas Hurd, read the 1987 report and is documented as expressing his approval of the SDS’ work.

Although the Home Office stopped directly funding the SDS in 1989, there was further interaction with a Home Secretary. On 16 October 1993 anti-fascist groups held a march on the BNP headquarters in Welling, South London. Seven of the SDS’ ten officers were in relevant groups. One was in the BNP, guarding the building. Others, including Peter Francis, were in the anti-fascist crowd. Between the two sides were 5,000 uniformed officers, many in riot gear. That’s three separate lots of police on the streets, all licensed to fight the other two – which is exactly what happened.

Afterwards, Francis – who has since turned whistleblower – joined other SDS officers at their safe house in Balcombe Street, Marylebone where they were visited by the Met Commissioner Paul Condon who personally gave each of them a bottle of whisky. A surviving letter shows the Home Secretary, Michael Howard, was due to meet the SDS officers with Condon but was unable to attend.

The targets of secret police reflect the establishment’s values, not any moral objectivity. Protests of all kinds are treated as a dangerous threat to be contained by force. An active desire for change is, in and of itself, a problem. 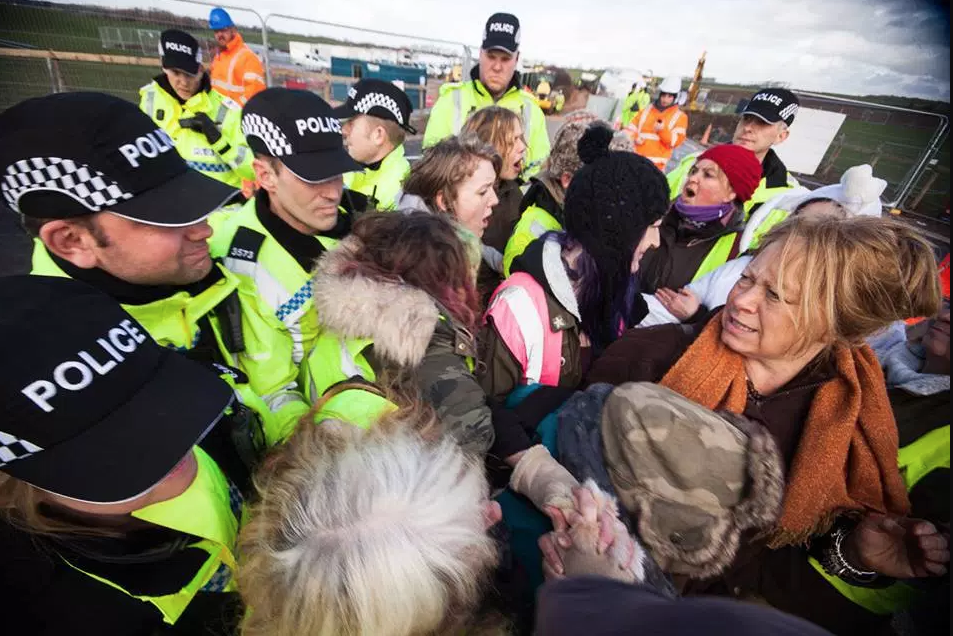 Image: Via Drill or Drop – who report escalating violence used against protestors of a fracking site in Lancashire

As generations of activists up to and including today’s anti-fracking campaigners can testify, the casual beating up, fitting up and harassment of people who dare to voice dissent is the clear task of uniformed officers. It’s not just the secret police, it’s a policing culture that cannot distinguish between a threat to national security, a threat to corporate profit, a threat to government policy and a threat to police credibility.

This is exactly why it was all so secretive. They needed to ensure the general public had no idea what was being done, how our protectors and elected representatives were running a counter-democratic campaign against us. They knew it was inexcusable and so ensured that, if it did get out, as few and as lowly people as possible would be held responsible.

The truth exists but largely just in the memories of the perpetrators. The faltering public inquiry process may yet bring forth more whistleblowers. The Met admit that a lot of ex-spycops have great hostility to their former employers. If an officer gets scapegoated, they may well point up the ladder.

Such hope relies on the integrity of the spycops, something they conspicuously lack. But then, as Peter Francis has shown, contrition is possible. Most activism is based on the idea that people can drastically change their lives to make a better world for others. We may yet come to know the truth.