The coronavirus pandemic has had a profound effect on all areas of public life including the right to protest, with the introduction of the most wide ranging restrictions on civil liberties in the UK for more than 75 years, despite no debate or scrutiny by Parliament.

The European Convention on Human Rights states in Article 7 that ‘a criminal offence must be foreseeable and accessible’, so with such new wide-ranging laws it’s important that they are explained and communicated effectively.

“Any restriction on liberty which is backed by the potential of coercive law enforcement action and penalties involving having a criminal record and paying a potentially unlimited fine, must be contained in very clearly expressed legislation so that it can be applied consistently, proportionately and rationally.”

In his landmark ‘Rule of Law’ speech in 2010, Lord Bingham said:

“The law so far as possible should be clear, accessible and intelligible”

In late March, the government brought in the Health Protection (Coronavirus, Restrictions) (England) Regulations 2020, a set of regulations in law which they unfortunately accompanied with some inaccurate further explanations, along with a set of guidelines/advice which were described as rules but that weren’t actually backed by the new law.

Police forces around the country then took a variety of actions and approaches, some of which have been both excessive and unlawful – use of drones and spot checks on people to look in their shopping bags among the more notable. Widespread concern led to a CPS review which found that all 44 charges brought under the new legislation were unsustainable, with the majority withdrawn altogether and just 13 going back to court – all of the tens of thousands of Fixed Penalty Notices which have been issued are also under review.

There are undeniable valid health issues at stake, but it is important to ensure that in a supposedly democratic and free society, the right to protest is not disproportionately curtailed, and that any legal restrictions on that right are applied fairly, clearly, and without political bias or corporate influence.

In our film it’s clear that in the recent policing of protest we’re a very long way off from that.

THE RIGHT TO FREE ASSEMBLY AND ASSOCIATION

The new regulations placed draconian restrictions on ‘gatherings’. Up until the 1st of June this banned any groups of more than 2 people in a public place unless from the same household, other than for work, or for a funeral, or unless related to a house move, care for the vulnerable and other emergency assistance, or in relation to legal proceedings. This was relaxed slightly on last week to allow a few more activities and up to six persons.

Under UK law, this type of ban on assembly requires justification in order to comply with the Human Rights Act 1998, and specifically Article 11 – the Right to Free Assembly and Association – so there are major questions over its compatibility both in theory and in practice.

On the theory, there are some basic legal questions over definitions, such as what constitutes a ‘gathering’ , as in how near or far from others do you need to be before you’re part of one, and do you have to have a ‘shared intention’ or is just being nearby enough? For example, if there’s a small socially-distanced protest going on and you’re on your way to work but stop briefly to watch from a few metres way, as it stands, the regulation permits the police to arrest you. That would clearly be unreasonable.

The use of the word ‘gathering’ produces problems of its own. It’s really important to have clarity so that people can reasonably predict whether they are breaking a law or not.

The term ‘assemblies’ has, through years of legal arguments in court, become clearly defined as groups that have some common purpose, but ‘gatherings’ is a term with no such legal history. If interpreted the same way as an assembly then you could suggest that people queueing while socially distancing outside a supermarket or waiting for a bus are a ‘gathering’ because of their common purpose, but if the definition doesn’t involve common purpose, then strangers stopping to cross a road might form a ‘gathering’ and thus break the law.

This might seem silly and pedantic, but law and the justice system can only work fairly if the meaning and interpretation is clear.

In practice, it cannot be proportionate for the law to target political assemblies rather than any other form of assembly.

As shown in one of the examples in our film, police used the restrictions to close down and collect names and addresses of participants at a small socially-distanced protest against HS2 construction. Meanwhile hundreds of construction workers were free to assemble inside.

The officer at the HS2 protest suggests in our full video of that event that the government deems protest as non-essential (even when socially-distanced), but construction of HS2 is essential (despite the difficulties in distancing and the obvious health risks for workers).

This is particularly worrying given it appears that HS2 Ltd is paying millions to the police in order to monitor and counter protest, while at the same time in the midst of a pandemic, construction work is continuing at pace.

The Civil Contingencies Act 2004 and the Emergency Powers Act 1920 were both constructed specifically to empower a government in times of crisis. They were drafted with great care in order to balance any need for emergency powers against any danger of overreach by an authoritarian government. Among safeguards are a requirement that the government should declare an emergency and that Parliament should be summoned if not sitting, that new regulations must be approved by Parliament, and that they are reviewed every month.

However, Johnson’s government instead used more obscure powers granted by the Public Health (Control of Disease) Act 1984, and this gave them extraordinary authority outside of Parliamentary approval. The timing was extraordinary too. Parliament adjourned for Easter on 25th March, and the regulations were made on the very next day at 1pm. The Public Health Act didn’t require Parliament to be summonsed, so there was no opportunity for any scrutiny.

Legally there is a glimmer of hope for protesters at least. By using the Public Health Act, there is a strongly implied legal requirement that the regulations are necessary to protect public health, so if they are drafted or used for any different purpose (such as to clamp down on otherwise safe protest, or to minimise any disruption to an economic activity) then that would be ultra vires or invalid. But it will take time to test and reach a conclusion on this in court, so in the meantime there is a serious ‘chilling’ effect on the right to protest.

“Public laws should be exercised reasonably, fairly and honestly, and importantly, for the purpose for which they are conferred”  Lord Bingham ‘The Rule of Law’ (2010)

At the HS2 protest, Sergeant Tapp (who appears to be from ‘Special Operations’ – a unit assigned to tackle so-called ‘domestic extremism’) is filmed threatening a peaceful and socially-distanced lone protester with the “health implications” of being taken to a police station where there’s “not much opportunity to socially distance”. This appears to turn the purpose of the Public Health Act on its head.

The science strongly suggests that the risk of virus spreading in the open air where people maintain a 2 metre distance is minimal, and would certainly not be enough to constitute a proportionate restriction on Article 11 – the right to free assembly.

At the first recent UK Black Lives Matter protest in London, thousands of people ‘assembled’ in defiance of the regulations, but police took a very soft approach for much of the afternoon -perhaps a decision by the authorities to signal some level of approval of this particular issue. But later in the afternoon, police moved into a crowd who were blocking the roads near Parliament and began making arrests using Coronavirus regulations.

Some officers claimed that the protest was unlawful under Section 7, and were making arrests, while others said they weren’t stopping the protest but rather ‘facilitating lawful protest’.

Then police ordered people who were socially-distancing in the road to move to the pavement (where people were crowded together surrounded by dozens of police, none of whom were wearing face-masks).

This contradictory mix of approaches clearly put some at greater risk of infection, and was far from “clear, accessible and intelligible”.

The day before, also in Parliament Square, dozens of Extinction Rebellion protesters lined up with placards calling for a Citizen’s Assembly to help find a way out of both Coronavirus and climate crisis. They were very careful to observe absolute social-distancing, standing metres apart and wearing face-masks. 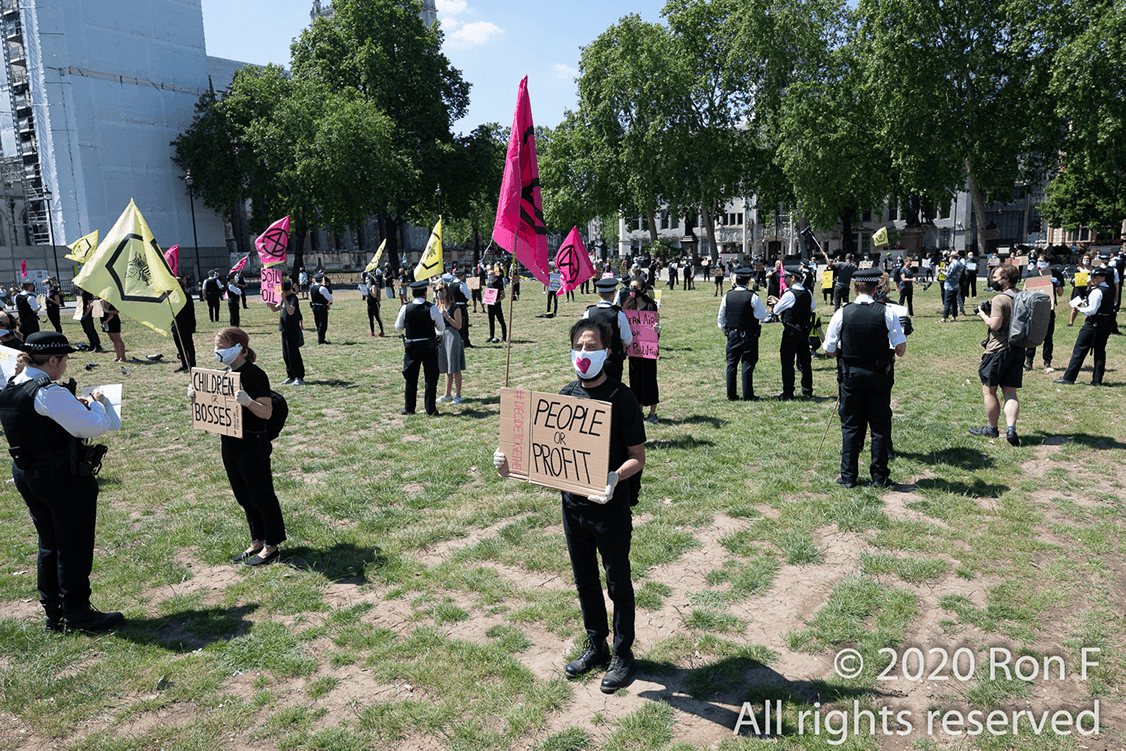 As you can see from Ron Fassbender’s photograph, dozens of police moved in, many of them breaking social-distancing guidelines themselves, handing out fixed penalty notices and making arrests.

In our film, one of the protesters, Joel, describes how he was arrested along with others and points out that if he’d been sunbathing or exercising he would not have been. In this case, the police were defining ‘common purpose’ as the holding of banners and overt political expression. In other words they were targeting a political assembly rather than any other form of assembly.

At the more recent ‘Black Lives Matters’ protest last weekend, after a large and peaceful protest with minimal policing, some skirmishes broke out in Whitehall, and according to witnesses and legal observers, police then used the controversial ‘kettling’ tactic to imprison hundreds for several hours into the night, going completely against any public health aim of encouraging dispersal. Eventually, members of the public caught up in the kettle were released one by one on condition that they removed face masks to be photographed and gave their names, addresses and dates of birth. This type of kettling and data collection has previously been successfully challenged in court, but last week officers were claiming that the so-called ‘Mengesha rights’ did not apply due to CoVid regulations. At least one protester was arrested for refusing to comply.

In normal times, the sensible approach would be to get yourself arrested, challenge and win in court, thus creating a chilling effect or setting legal precedents in order to prevent the police from overstepping their powers (and possibly sue them for false imprisonment etc. to make it worth your while).

But with the reality of the coronavirus disease, police vans, police stations, and court rooms have become life-threatening places, and for many people who wish to exercise their freedoms and rights to protest, the risk is too off-putting.

So we are left with the state applying completely arbitrary power with little or no challenge inside or outside the political system, at a time when we are hurtling towards a no-deal Brexit, an unprecedented economic recession, and catastrophic climate and ecological crisis that only garners lip-service.

It seems like only radical systemic change can possibly confront all these issues.

In the UK we are taking down statues, in the USA they are diverting police budgets to youth clubs, and climate protest movements all around the globe are set to grow as lockdowns ease. Maybe it’s just my happy delusion, but I feel that there is a growing network around the world, a movement of movements connecting issues, communities and struggles in a way that history has never seen before, and against which arbitrary, undemocratic power will not prevail.